On the border of two worlds 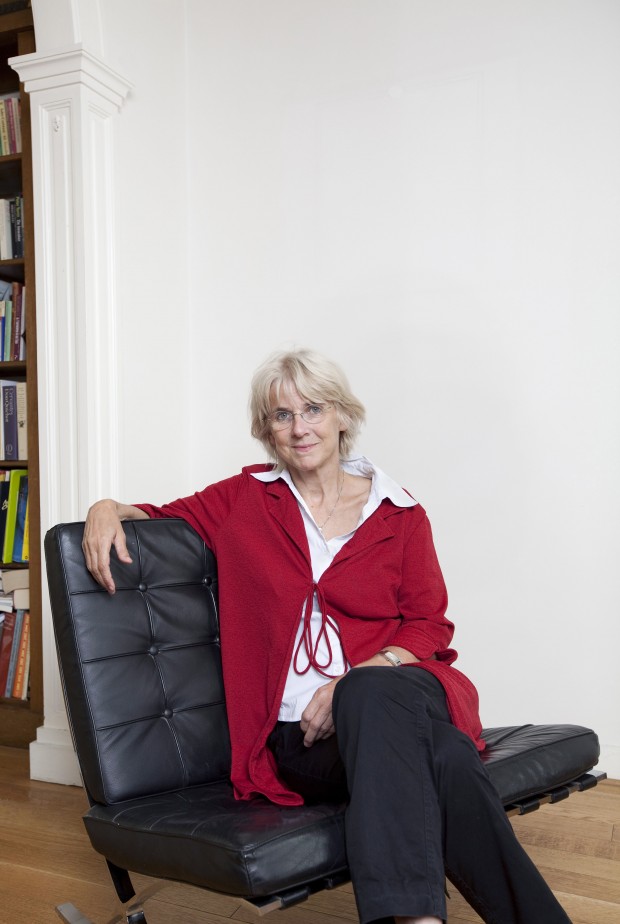 Joke van Leeuwen (1952, The Hague, NL) writes, illustrates and performs. She was City Poet of Antwerp and was appointed Poet of the Low Lands for 2015-16. Her best known book is probably ‘Eep!’, a story about a girl with wings instead of arms, who tries to follow her own destiny within the ‘normal’ world. The Dutch Van Leeuwen moved to Brussels when she was thirteen and currently resides in Antwerp. The experience of being somewhat of an outsider seeped into her work, leading to an idiosyncratic oeuvre that received numerous awards. ‘I’m a bit of both countries. I think that’s where I belong, on the border between two worlds’.

On a day like any other, Warre wanders off into the rolling landscape to go bird watching. When he decides to look down instead of up, he finds a creature under a bush that his bird guide doesn’t feature: a tiny creature, something between a girl and a bird. Warre and his wife Tine decide to raise her as a human child, hiding her wings and forbidding her to eat with her mouth or fluttering to the ceiling in public. But Viegetlje, who has a fondness for worms, sautéed beetles and bread with peanut butter, follows her adventurous nature and heads out into the world, while the people she encounters frantically seek to keep her from possible harm.

I didn’t think it could get any worse

Dutch peanut butter, a Walloon landscape and two archetypical Flemish first names; add a challenged yet hopeful and resilient character, and you get a picture of Joke van Leeuwen’s personal experiences. She grew up as the daughter of a reverend who moved around The Netherlands, family in tow, before taking up a position as professor in Theology in Brussels. Van Leeuwen was thirteen, tired of cycling to the nearest town to go school and ready for a change, because ‘it couldn’t get any worse.’ But despite lots of good will, going to high school in Brussels turned out to be quite the cultural shock.

‘Even the teachers were unaware of the scope of our many differences, great and small.  Little things that can really throw you off such as your place in morning roll call. In Belgium the prefix is written with a capital, so I got up when all students’ names beginning with an ‘L’ were called but was reprimanded for not paying attention; I was supposed to rise at ‘V’. Everything I’d ever considered a certainty was pulled out from under me like a rug.’

Besides the puzzling Flemish meaning of familiar Dutch words, life outside the walls of school and home meant she also had to deal with people speaking French. Like the time she went out to buy a pair of tights (‘maillot’ in Dutch) but was presented with an array of bathing suits (‘maillot de bain’ in French) instead. Van Leeuwen translated several of her experiences from this period into a series of poems (‘Kind in Brussel’ (‘Child in Brussels’) from ‘Four Ways of Waiting for Someone’, 2001) in which feelings of frustration mingled with sheer amazement are positively tangible.

After finishing high school, Joke van Leeuwen studied graphic arts at the Royal Academy of Art in Antwerp and the Saint-Lukas Institute in Brussels and history at the University of Brussels. She made her idiosyncratic debut as an author and comedian in 1978 after winning the Delft student cabaret festival, expanding her talents into many fields. Later she returned to The Netherlands because of her husbands work, but after their divorce and her son had left the nest, she ‘voluntarily returned to Belgium.’ Van Leeuwen: ‘I felt stifled in Amersfoort, the small city where I lived. People thought it arrogant to talk about experiences of living abroad. I discovered I feel more at home in places that are a melting pot, like Brussels.’ She chose to live in Antwerp for practical reasons: ‘I have regular engagements in The Netherlands’.

A hybrid backdrop of Flemish and Dutch phenomena

Frustration, the ability to wonder and a determination to get it right (‘At home there would be a dictionary where I’d look up the right word’) are pretty useful qualities for a writer-in-the-making. ‘It had a positive influence,’ Van Leeuwen agrees. ‘I was a creative child already and language and imagination were stimulated by my parents, but the experience of moving to a different culture as a teenager taught me to improvise and think in detours at an early stage.’

The new culture provided her with a subject and a whole new array of words and images to add to her vocabulary, writing proved a means to process the experience. It made her contrary, meaning that in her opinion nothing’s true and everything’s possible. It’s a trait you will find in many of Van Leeuwen’s characters that crowd her stories set against a hybrid backdrop of Flemish and Dutch phenomena. ‘It happens naturally,’ says Joke van Leeuwen. ‘I simply choose what suits the story best – it enhances the fictitious character.’

Perhaps one of the most important aspects however, is the ability to see things from a different perspective. In daily life, her bi-culturality is as much of an influence as in her work. ‘It would be beneficial if everyone would live abroad, even if it’s just six months,’ Joke van Leeuwen believes. ‘You should however make a proper effort to encounter that new culture and not stick within a colony of compatriots. Only then you can experience how relative your own habits and values are, even when it’s just a neighbouring country. Ultimately you can even play a role in helping others understand and familiarise themselves with that culture. This was my main reason to accept the position as Dichter der Nederlanden (Poet of the Low Lands).’ With this honorary position the Algemeen-Nederlands Verbond, a foundation that encourages a greater familiarity between Flanders and The Netherlands, celebrates the fact that 200 years ago Belgium and The Netherlands were a single country for a period of fifteen years.

In her acceptance speech, Van Leeuwen refers to herself as a ‘two-legged bridge’ . ‘Sadly not many people are interested in this assignment; remarkably less then when I was Antwerp’s city poet. There’s especially little attention from The Netherlands, which seems to be more and more oriented towards domestic issues. I’d say that’s quite worrisome in an age when mono-cultural thinking is impossible to maintain. The situation illustrates what a disadvantage it can be when people haven’t spent any time in a different culture – they keep thinking inside the box.’

Joke van Leeuwen is concerned but determined as well. ‘I see a clear role for myself, within my work but also in my private life. An example I like to give is when a Flemish jury labelled a Dutch author ‘merkwaardig’. In Dutch that means ‘strange’, but in Flemish it means ‘remarkable’. The author was given a compliment and he wasn’t aware of it! I was able to translate, and he went home feeling satisfied, but when you think about it, it’s wrong that we don’t understand each other even though the foundations of our language are the same. On both sides of the border television programs from the neighbouring country are subtitled. The problem with that is: you stop making an effort to understand each other. But it’s really not a problem if every now and then you come across an unfamiliar word!’

It becomes clear that there is also a political motivation involved when promoting bi-culturality, also outside the Flemish-Netherlands realm. ‘When you’ve been part of two countries for as long as I have you should be allowed to have two passports. I’m not really Dutch anymore, whatever that may be (‘I haven’t eaten an ‘oliebol’ on New Year’s Eve for years’, she jokes), but should I turn my back on a country that awarded me a state prize? (Theo Thijssensprijs, 2000) At the same time I’d like to be able to vote on a federal level in Belgium. I live here, I pay my taxes, I participate. But apparently it doesn’t work like that.’

Language can be a creative tool, but a political one as well. Learning a language can help understand a culture and enable communication. As chair of PEN Vlaanderen (PEN defends writers and the freedom of speech around the world, both through direct and indirect support.), Joke van Leeuwen is well aware of this notion. ‘We’re promoting Arabic writers that came here from Iraq and Syria for example. We enable them to do their work, but if they really want to settle here, they’ll have to be given the opportunity to learn Dutch as soon as possible. An asylum seekers’ centre is the worst possible place if you want to integrate and get wider recognition.’

You’re not going back to that camp

Van Leeuwen illustrates with a personal memory. ‘I remember the Bosnian family that came ‘on holiday’ with me and my husband and son. They fled Bosnia because of the war and stayed in a camp. They hardly ever went out. Their four-year-old daughter lit up during her time with us because she could play, learn, interact. We told them ‘You’re not going back to that camp’. So they stayed with us until they could make a life of their own.’

Joke van Leeuwen’s ‘Belgium for Dummies’ tip follows quite naturally: ‘Listen, watch, don’t judge a book by its cover and don’t put all Belgians in the same category. Of course that applies to everything. More specifically? Don’t call Flemish a funny or even charming dialect – it’s degrading.’